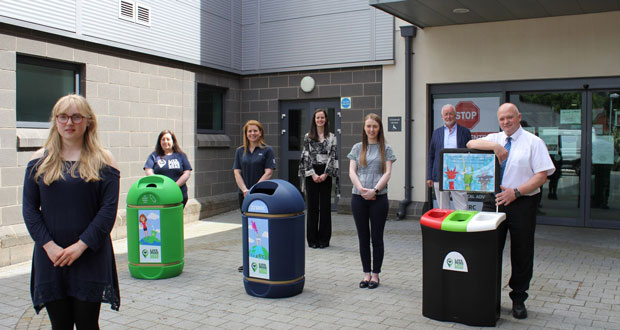 A college in Lisburn in Northern Ireland has come up with an innovative way of reducing litter in and around their campus by installing talking litter bins.

The five ‘babbling bins’, have been introduced by the South Eastern Regional College (SERC) alongside a set of recycling bins as part of a project by the college’s Eco Committee. In addition to the campus, the bins are located at some bus and railway stations in the city.

The talking litter bins have a voice box and a sensor which detects motion and triggers a recorded message, so the bins ‘speak’ whenever rubbish is deposited. The messages include: ‘Can it for a better planet’ and ‘Give a hoot, don’t pollute’. They were part funded by a grant of £3,000 from the ‘Live Here Love Here’ Small Grants Scheme which is run by environmental charity Keep Northern Ireland Beautiful.

Lizzie Buick, Deputy Head of Enterprise and Entrepreneurship at SERC commented: “This was very much a collaborative initiative involving different sectors of the community, as well as the college’s Eco Committee and Enterprise, Entrepreneurship and Environment team. The aim was to raise awareness of issues around litter and recycling as well as improving opportunities for responsible litter disposal across the city.”

As part of the initiative, the committee launched a competition for staff and students to come up with messages for the bin. The messages selected were then recorded by SERC’s performing arts students. In addition, students created artwork for the recycling bin panels.

The talking bins were manufactured by Derbyshire based company Amberol.  Managing director Patience Atkinson-Gregory is delighted that the company was able to play a part in the litter initiative. She commented: “It’s good to see young people working together to raise awareness of issues such as littering and taking direct action to help improve facilities within their environment. This was an imaginative and exciting project, and we are delighted to see our talking bins helping to make a difference.”

All Amberol’s litter bins are made from recyclable or recycled polyethylene. The company also manufactures talking animal bins which can be found in parks, schools and play areas across the UK and as far afield as Australia.

South Eastern Regional College has eight campuses across the area, offering specialist facilities and a range of learning experiences to over 30,000 users. The college also employs around 1,000. 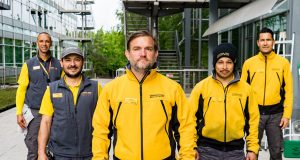