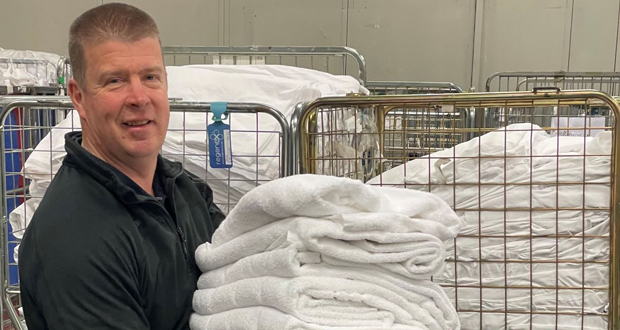 Gone – or at least fast disappearing – are the days of throwing waste linen into a receptacle marked ‘recycling’ and feeling like you are meeting your environmental responsibilities.

We know too well there is no such place as ‘away’, as in ‘throwing things away’, and therefore the idea of sending them somewhere to be recycled has felt more positive and palatable.

However, in reality, global markets are saturated and capacity for processing can be hard to find. This is due largely to the still-accelerating global fast fashion industry, but healthcare and hospitality contribute to the issue, too – according to the Textile Services Association, UK laundries currently throw out 2,000 tonnes of stained or discoloured linen every year.

If this sounds gloomy, there is good news too. We should not be desperately dismayed about the difficulty of recycling because there is clear evidence that we should be doing less of it.

Recycling ranks at only number 42 on a list of 82 possible actions to mitigate climate change, according to Project Drawdown.

A simpler ranking system which also sees recycling as very mid-table is the Hierarchy of Waste Management, endorsed by the UK Government and others, and recognised as guidance for best practice.

After not using the earth’s resources to manufacture something at all, re-using that item for as long as possible is the next best option.

When applied to the arena of commercial linen, it means that there are more environmentally-beneficial ways to deal with stock that fails to meet inspection, rather than condemning it to rag.

Increasing numbers of laundry owners and managers are turning their attention to the fact that the vast majority of ‘condemned’ material can actually be revived and returned to stock, thanks to advancing technology.

When looking at items that are greying or marked with fake tan, food, rust, chemicals, or mildew, this may seem unlikely, but processes have been developed in recent years to lift stains and revive otherwise good linen.

The result is that items can once again reach even the stringent requirements of high-end hospitality, for many more washes to come.

In turn, getting the longest possible service out of every piece of linen saves both carbon and money, by cutting down on the unnecessary purchase of top-up stock.

Enlisting specialist help also minimises the limitations of in-house ‘kill or cure’ washing, and the extra costs associated with the practice.

So, yes, such stock will eventually go to rag if it really is indelibly marked — or more likely ripped or torn — but much later in its lifecycle.

In the meantime, as mentioned, developing thriftier habits with every bedsheet, towel, work uniform or tablecloth, is helping laundries with both cost and carbon reduction targets at a time when both are of huge importance.

The benefit to the environment is clear, given the well-publicised toll that textile production takes on the earth’s resources – and the consideration that recycling processes themselves require large quantities of water and generate carbon.

A laundry business prioritising re-use is able to achieve month to month reductions in outgoings, which are particularly welcome in these times of rising cost of cottons and polycottons and ongoing disruptions to supply chains.

And in the longer term, firms with robust sustainability policies are the ones who will thrive and prosper.

Banks, other lenders, and investors, as well as potential commercial partners awarding contracts, are already favouring companies with a genuine desire to do the right thing by the planet and an action plan to prove it.

So, in the world of commercial linen in 2023 and beyond, re-use is king — and more and more operators are realising this. While recycling plays an important supporting role, it is no substitute for getting the most out of every precious piece of linen.

Regenex’s free white paper, Loving linen longer: Five carbon and money saving reasons to get the most out of laundry stock, is available to download now. 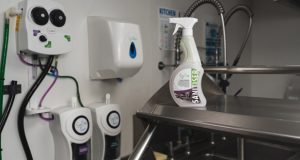 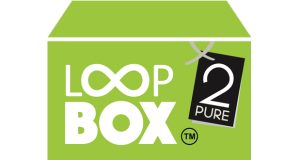