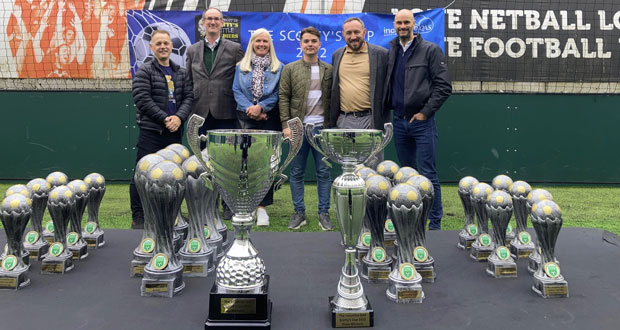 On 29 April, Incentive QAS hosted a charity football tournament to raise money for its nominated charity, Scotty’s Little Soldiers. The event kicked off at 2pm with eight teams competing for the coveted Scotty’s cup!

RAF II SQN were the lucky winners of the inaugural Scotty’s Cup with BPR taking the runners-up plate.

A penalty shootout took place before the semi-finals match, with Rob Doyle (from Mayflower) winning the Samsung tablet.  As the shootout was sponsored by Mayflower Doyle kindly donated the tablet to Scotty’s.

The tournament raised over £4,500 for the charity and will undoubtedly become an annual fixture for Incentive QAS.

Incentive QAS says the event wouldn’t have taken place without the generous time and financial donations from its sponsors:

Children’s Armed Forces charity, Scotty’s Little Soldiers, is the chosen charity for national facilities management company Incentive FM Group. It is dedicated to supporting bereaved children who have lost a parent while serving in the British Armed Forces.

Martin Reed, Chief Executive, Incentive FM Group said: “We are very proud to be supporting such a great charity. We have a huge amount of respect for all our servicemen and women therefore helping the children of those who have lost a parent whilst serving in the British Armed Forces is of great importance to us. We have had great success in the past fundraising for our chosen charities and hopefully this one will be no different.”