Setting the scene
In 2017, leading recycling company, First Mile, revolutionised the way business waste is processed by designing and building the UK’s first sack-sorting facility. Since that time, the Sacktory (as it’s affectionately known) has helped significantly increase business recycling rates in London, as well as minimise company vehicle emissions. Indeed, in its first three months of operations, the Sacktory prevented 125,000kg of CO2 emissions and helped First Mile smash the Mayor’s 65% recycling target for London, 12 years ahead of schedule.

There’s no doubt that the buzz around sustainability – for example, tackling our single-use plastic addiction – has reached fever pitch. Our nation, quite rightly, is demanding that both businesses and consumers do more to tackle our wasteful ways and make the most of our resources while protecting our planet and all that inhabit it.

However, what’s less well-documented is the stark reality of what can happen to our waste. Figures suggest that London burns over half its waste, with an estimated two million tonnes sent for incineration – double that of a decade ago. With reports that some London councils are recycling as little as 14% of their waste, a huge amount of perfectly good recyclable material is being incinerated, lost forever and unable to be used in the circular economy that the planet is crying out for.

At First Mile, our mission is bold. We want to create a world where we can recycle everything. Yet the landscape within which we operate comes with many challenges – the infrastructure available for business recycling is substandard, and the recycling rate itself needs to be higher. Set against this backdrop, we not only collect general waste from businesses in London and Birmingham, but provide dedicated recycling stream collections for over 20 different materials, from coffee cups and coat hangers, to compostable packaging and confidential waste.

Once we’ve collected this waste, we go out of our way to identify forward-thinking solutions to recycle and repurpose these materials. This includes transforming food waste into green energy and nutrient-rich fertiliser, used coffee grounds into bio-fuels and, most recently, even wellington boots into horse arena surfacing.

Creating the Sacktory
Prior to the invention of the Sacktory, we already boasted an impressive recycling rate, , but it soon became clear that this rate was plateauing. Efforts to educate our customers in what would and wouldn’t contaminate their recycling sacks got harder as products and packaging became more complex. This meant that we were faced with an ever-growing business need to increase customer recycling products, without putting more vehicles on the road which negatively impact upon London’s air quality.

So, the idea of building a sack-sorting facility was born, allowing us to consolidate multiple recycling stream collections on fewer trucks, and then divert these rounds to a self-sufficient, owned and managed facility. We could then pre-sort these collections in-house, prioritising the salvage of recyclable materials with the remainder bulk-hauled to recycling centres for processing.

In April 2017, work got underway. Built on the historical brown belt land of north west London’s Park Royal, the £1 million construction took six months to complete. True to First Mile’s ethical values, minimising environmental impact was front of mind. The structure housing the Sacktory is built upon hardcore that was recycled from the original site, and with 80% recycled steel. Half of the vital machinery purchased was up-cycled and refurbished from other builds. Low energy motors and conveyors are installed for energy efficiency and LED-sensored lights illuminate the building.

Today’s operations
Fast-forward to today, and the Sacktory continues to evolve and be the greenest it can be.

It is in operation 365 days a year, and, since June 2019, now runs 100 per cent on renewable energy – including our electric vehicles that are charged on site.

The Sacktory now processes and sorts up to 100 tonnes of consolidated business waste every day, a large percentage of the 20 million sacks that First Mile collects from its 27,000 business customers each year. As well as processing specific recycling streams, the Sacktory also enables us to salvage materials that had been classified as general waste by customers. Our expert pickers on the line retrieve materials from general waste sacks that are then diverted to recycling – this gives us a further 10 per cent uplift in the amount we recycle. Tangible results
The Sacktory’s success is clear – it helps us super-size our recycling rate, raise the quality of our recycling output, and improve collection efficiency. The facility has also enabled us to reduce our vehicle emissions. As an example, in its first three months of being in action, 13 rounds of waste that would have been sent directly to third-party recycling centres was diverted to the Sacktory, saving as much as 125,000kg of CO2. Thanks to its stellar green credentials and impressive performance, the Sacktory bagged the Business Green Leaders’ highly-prized Green Infrastructure Project of the Year Award in 2018.

But, most importantly, The Sacktory has allowed First Mile to continue to strive for its goal to create a world where we can recycle everything. This not only sets an example for what can be achieved in the our sector, but it also realises the good intentions of those companies investing in a sustainable approach to their waste. 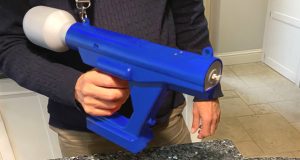 Sustainability at your fingertips